I was warned about Jakarta. ‘It’s polluted, dangerous and characterless,’ everyone said. Even the Lonely Planet calls it “a hard city to love”, noting the “relentless urban sprawl”. Yet now that I’m here I find myself liking the place, somewhat to my own surprise. It’s true that the traffic is terrible. In the mornings it takes me 15 minutes to get to the UNICEF office on foot - or 30 minutes in a ‘taksi’. The roads are solid with cars, although a tide of motorbikes makes its way through, flowing between the cars or racing along pavements three abreast. Travelling by foot, you have to dodge these same motorbikes and breathe in their exhaust. You also have to cope with the intense heat, which I managed by staying in the shade of the skyscrapers.

And it’s true that Jakarta is dangerous. When we arrived at the airport, my colleague Yas made straight for the premium taxi stand. “Aren’t the meter cabs cheaper?” I asked. “Usually yes,” he replied. “But last year a member of staff was kidnapped by a taxi driver at the airport and taken to a cash point.” Once we got to our hotel we had to go through three rounds of security, including metal detectors, blast barriers and razor wire, a legacy of the 2009 Al-Qaeda linked attacks on targets perceived to be ‘Western’. It was the same at the office.

But characterless? I really can’t agree with that. Most of the people thronging the streets and riding the motorbikes did so in cheerfully brash and colourful batik shirts. The local currency is measured in units of 1,000 rupees, which meant I had up to a million in my wallet. “In Indonesia you feel like a rich man,” Yas joked. The skyscrapers and malls were interspersed with a multi-cultural medley of architectural curiosities, including crumbling Dutch colonial buildings in the Kota, or old town, a Catholic church in the style of a Chinese temple (complete with stone lions and a red tiled roof) in Chinatown, and a huge Greco-Roman palace near my hotel in the business district.


When I first saw the latter building, with its huge stone portico, three-story-high pillars and array of Hellenic gods and goddesses, I thought it must be a Government building, or maybe a lavish European embassy. “Actually it’s a furniture store,” Yas said, and on closer inspection it did indeed have posters proclaiming ‘Great Sale! 70% Off!’ strung up between the pillars. Jakarta is also a Muslim city and at 7pm the skyscrapers and slums alike echoed to the sound of the muezzin, or call to prayers, which immediately transported me to North Africa in my mind.


The main reason I liked Jakarta, however, were the people. They fall into what I think of as the ‘friendly group’ of South East Asian cultures, as opposed to the ‘polite group’ where you have to work much harder to win people’s trust and respect. After only a week in the office I had made several new friends, including Charlie from the fundraising team, with whom I quickly established a common interest in blogging, photography and travel. A cheerful and outgoing Indonesian, Charlie has a popular blog, The Other Side of the Coin, where he documents the lives of marginalized people through evocative black-and-white photography.

I was planning to do some photography at the weekend and asked Charlie for advice on locations. After discussing a few, he decided he was going to come along and show me round. “We’ll need to leave at 5:30am on Saturday,” he insisted to my dismay. But I knew he was right. Sunrise is one of two ‘golden hours’ for photographers when the sun is low in the sky. It’s also a time when you can observe the activities of the working class, who typically rise earlier than their rich counterparts.

So the next day I struggled up at 5am and went downstairs to meet Charlie. He arrived on a motorbike with a spare helmet “I hope you’re OK to ride one of these,” he said, smiling. “It’s much faster”. “No problem,” I said and clambered on the back. We were soon speeding through the deserted streets of Jakarta in the pre-dawn half light. It felt like a completely different city, particularly as we approached the old town, where the beams and rafters of half-collapsed Dutch buildings were silhouetted against the lightening sky.

Our first stop was the docks at Sunda Kelapa. This was the main port of the Sunda Kingdom of Pajajaran until the Dutch arrived in 1522. The sun had just risen, and sat fat, red and squat on the horizon, enveloped in a dirty haze of pollution. The air was cool for the first time since I arrived in Indonesia and the docks were eerily quiet. On the west side of the harbour was the main attraction – a long line of Indonesian sailing ships called ‘pinisi’, which have been built to the same design since colonial times and are still very much in use. Their wide prows and tall masts stretched out before me, lit up by the first rays of sunrise. It was like stepping back in time. “There used to be docks like this in London in my grandparents’ day,” I told Charlie. “But now they’re all converted to offices and apartment blocks.” 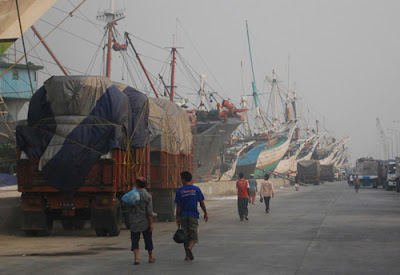 The ships all had auspicious-sounding names like ‘Surya Sejahtera’ (Wealthy Son), ‘Hati Makmur Bersama’ (Prosperous Hearts) and ‘Citra Bahagia’ (Image of Happiness). “This is based on traditional beliefs,” Charlie explained. “Indonesians used to believe in a god and goddess of the sea. They still give their boats a positive name to encourage the gods to look after it.”

The docks were also home to sailors, lorry drivers and beggars. Some were still asleep on the boat decks, in lorry cabs or on the pavement. I saw a pair of bare feet sticking out of the window of one truck. Nearby, a homeless man with a thick beard and dreadlocks was waking up and looking around suspiciously. Other people were already up and washing with water from barrels, or having breakfast, squatting on the pavement beside informal street stalls.

I spotted one sailor sat photogenically on an iron bollard in front of a ship, and asked if I could take his photo. He nodded and spoke to Charlie in Bahasa, the main language of Indonesia. “He says you can go up to the boat if you like,” Charlie translated, indicating a narrow wooden plank balanced at a 45-degree angle between the dockside and the prow of the boat. It looked precarious but I’d seen sailors walking up and down carrying goods, so I figured it must be safe enough.

I made my way carefully up to the prow of the appropriately-named ‘Image of Happiness’, from which I was rewarded with an amazing aerial view of the harbour, stretching past the boats and lorries to tall cranes in the distance. As a boy I used to read adventure stories by Robert Louis Stevenson (later by Joseph Conrad) and dream of being a sailor, so it was exhilarating to find myself standing on the prow of a real-life wooden galleon. “Are you coming up?” I called to Charlie. He laughed. “No, it’s too dangerous for me.”


Of course life for these modern sailors is far less glamorous than for their swashbuckling counterparts, if indeed the reality ever matched the fiction. This became apparent as the docks came to life, slowly and imperceptibly at first. The swish-swish of wooden brooms on the pavements was soon joined by the hammering of drills, the pup-pup-pup of engines and the shouts of men. Groups of sailors started winching bags of cement and fertiliser onto the boats by hand. I saw one bag catch on the edge of boat and split, spilling white fertiliser across the deck. It was hard, manual labour. “These are also marginalised people,” Charlie observed.

After the docks, we drove a short distance to the fish market in a nearby slum neighbourhood. Fishermen arrive with their catch during the night and the market gets underway before dawn. At 7am, we’d already missed the main activity but several stallholders were still selling their slippery wares to housewives and restaurant owners. The fish were laid out on wooden table tops, buzzing with flies. Most people were happy to be photographed and one stall holder helpfully held up a huge finned fish for me, before demonstrating the de-scaling process with an alarmingly sharp knife.

Alongside the market stalls was a semi-derelict old wooden building. “This used to be the marketplace in colonial times,” Charlie said. “Now homeless people sleep there.” He pointed to the empty doorway. “It’s OK, you can go in,” he said. Inside it was dark and it took a moment for my eyes to adjust. Long electric cables that must have once supported lights snaked down from the high ceiling. It was almost deserted except for a few men sleeping on mattresses or watching a small TV that had somehow been installed in the corner. Shafts of sunlight came through the gaps in the wooden slats at a low angle, creating patterns of light and shade on the bare concrete floor. A group of young children ran over for a photo and ‘high fived’ us as we left. I was amazed that the building was still standing and grateful to Charlie for giving me the chance to explore it. I would never have known or dared to go in on my own.


Our final stop was in Chinatown for breakfast. We grabbed a bowl of noodles at a stall opposite the church in the style of a temple, cooked by an old man with a hunched back and shaky hands. This was where the anti-Chinese riots happened in 1998, during the overthrow of former dictator Suharto. Charlie is ethnically Chinese and remembered the riots well. “I was getting the bus home and didn’t realise what was happening until I saw the black smoke rising from burning tyres,” he told me. “I called my parents and said ‘you must stay at home today’. Luckily we lived in a mixed-race complex, but in Chinatown the mob burned down people’s homes, raped the women and murdered them.”

Happily, things have since improved for Indonesia’s Chinese community, with efforts by successive governments to restore and integrate their culture. “Now we can learn Mandarin at school, buy Chinese literature in bookshops and even sing songs in our own language,” my colleague Ay-Ling told me later in the office. “Under Suharto all of these things were illegal.”

So there you have it – that’s why I liked Jakarta, in a 1,800 word nutshell. After our morning’s maritime adventure, Charlie dropped me back at my hotel/fortress. “See you Monday,” I said. Then I went upstairs, got back into bed and slept until lunchtime.